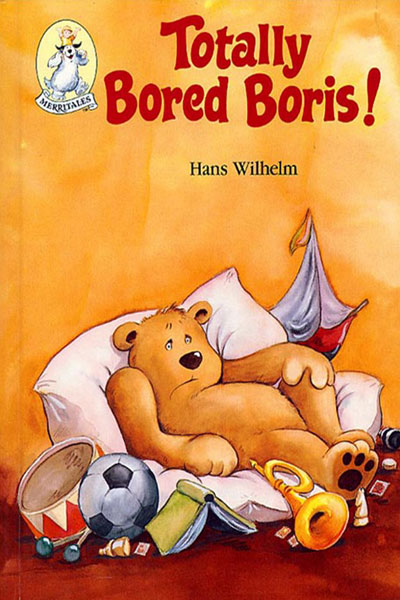 What do you do when you are totally bored and don’t feel like doing any activity? How do you kill the boredom? Totally Bored Boris is a short eBook story of a bear who was so bored to do anything.

It was a lazy day and Boris, the bear felt so much boring. He lost interest in playing with toys, watching television, read all the books he had, and found nothing to kill his boredom.

He went to his father carrying his trumpet and asked him to join to do something. His father refused that he already got some work to do. He was asked to go for fishing, but Boris refused as it would be still boring. He went to his mother and asked her to join him as he was so bored. His mother told that she promised his sister to teach how to bake cookies. Boris’s mother and sister asked him to join and enjoy with them learning baking. The bored Boris had no interest. He heard some happy noise and chat between his mom and sister. Unable to bear it and beat his boredom, he left his home.

He saw a bear carrying a huge cardboard, bigger than the size of the bear, followed by a group of bears. They were planning for a Christmas party and started to decorate the box.

Boris immersed in deep thoughts that he would build spaceship using the huge box. His sister was seen in the crew and they started doing the preparations. While they gradually built the party hall with trees and decorative pieces for celebration, Boris thought about construction of different parts of his dream spaceship.

His sister saw him sitting on the tree house. She told loudly that they were partying and she received old clothes and jewelry from her mother. She acted herself as queen, decorating herself beautifully like a princess. Boris, who was watching this silently was annoyed and doesn’t want to join the party. He decided to trouble the party by blowing his trumpet. What happened then? How Boris was able to get rid of his boredom? Read the full ebook and get enlightened.

The eBook features colorful and clear pictures. The pictures are sufficient to describe the story of the Totally Bored Boris! Your child can narrate the story watching the pictures.

Thank you for subscribing.

we respect your privacy and take protecting it seriously

You can find out more about which cookies we are using or switch them off in settings.

This website uses cookies so that we can provide you with the best user experience possible. Cookie information is stored in your browser and performs functions such as recognising you when you return to our website and helping our team to understand which sections of the website you find most interesting and useful.

Strictly Necessary Cookie should be enabled at all times so that we can save your preferences for cookie settings.

If you disable this cookie, we will not be able to save your preferences. This means that every time you visit this website you will need to enable or disable cookies again.