Home
The Hare and the Tortoise

The Hare and the Tortoise 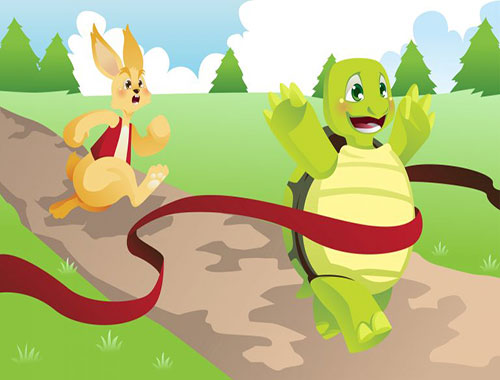 There once was a speedy Hare who bragged about how fast he could run. Tired of hearing him boast, the Tortoise challenged him to a race. All the animals in the forest gathered to watch.

The Hare ran down the road for a while and then paused to rest. He looked back at the tortoise and cried out, “How do you expect to win this race when you are walking along at your slow, slow pace?”

The Hare stretched himself out alongside the road and fell asleep, thinking, “There is plenty of time to relax.”

The Tortoise walked and walked, never ever stopping until he came to the finish line.

The animals who were watching cheered so loudly for Tortoise that they woke up the Hare. The Hare stretched, yawned and began to run again, but it was too late. Tortoise had already crossed the finish line.

This is the story that we have all grown up with. But recently, two additions have been proposed to the story.

After being defeated by the tortoise, the hare did some soul-searching. He knew that though he had tried hard in the beginning, he was not consistent, and had grown overconfident. He was determined to undo his mistakes, and invited tortoise for another race. This time, the rabbit was careful to run the whole distance, and of course, emerged the winner.

Moral: Fast and consistent may be better than slow and steady.

The race began. The rabbit was leading in front, with the tortoise far back trundling along. Around half way through the race, they came across a river. The rabbit halted on the bank of the river, wondering how to cross the river. Meanwhile, the tortoise approached the river slowly, got in to the water, swam across, climbed up on the other bank, ran the last few kilometers, and won the race.

Moral: when your capabilities are below par, choose a playing ground that gives you a natural advantage.

Thank you for subscribing.

we respect your privacy and take protecting it seriously

You can find out more about which cookies we are using or switch them off in settings.

This website uses cookies so that we can provide you with the best user experience possible. Cookie information is stored in your browser and performs functions such as recognising you when you return to our website and helping our team to understand which sections of the website you find most interesting and useful.

Strictly Necessary Cookie should be enabled at all times so that we can save your preferences for cookie settings.

If you disable this cookie, we will not be able to save your preferences. This means that every time you visit this website you will need to enable or disable cookies again.